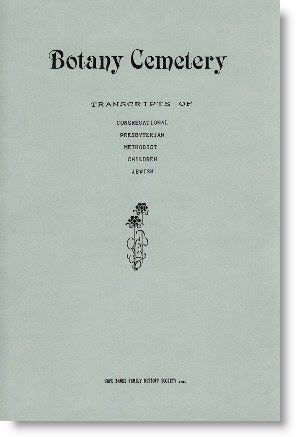 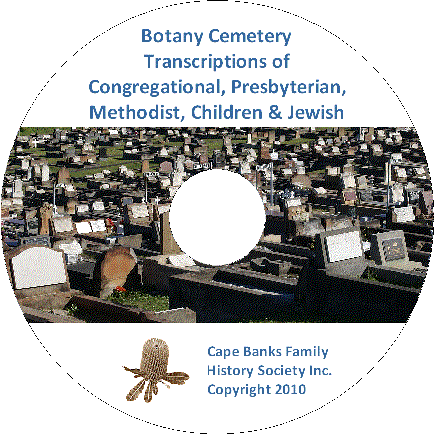 This is the fourth publication in our series of transcriptions of headstone inscriptions in all denominations in the Botany Cemetery. The society began the project shortly after its establishment in 1985. We commenced in January 1986 and have been working continually on it since then.

The three completed publications prior to this are . .

The project of transcribing the sections which are included in this book commenced on 17th September 1990 and was completed on 12th August 1991. We continued to transcribe without pause immediately after finishing the Catholic %ections which had occupied us for the previous two years and nine months. After a pause to allow mapping to be completed, we will commence to transcribe the General sections.

We continued our established program of “Cemetery picnic daysn held at two weekly intervals, except for the hotter months of November to February, and the number of transcribers who attended on those days varied from four to nine.

We maintained a progressive check on our accuracy by the use of computer print-outs which were provided for that purpose after each transcribing day.

The previously recorded inscriptions were checked against the information on the print-out sheets prior to proceeding any further. A great deal of accuracy is required by the transcribers and we are grateful to our members who have given their time to the project.
The five denominations in this book contain a total of sixteen sections and the number of entries is slightly over 3500. The information that is recorded is taken from the headstone inscriptions only. We have included all pertinent information and have omitted any superfluous wording. We came across a number of inscriptions written in non-English language and we have been able to obtain translations for these.

Botany Cemetery is situated adjacent to Botany Bay in the City of Randwick. The Trustees at the time of publication are as follows,

We are grateful for the help and co-operation which we have received from the Botany Cemetery Trust and from the staff of the office. Within the bounds of possibility, any help that we have sought has been given.

All proceeds from the sale of this book go to Cape Banks Family History Society Incorporated.

The listing is in order of surname and the first initial of three possible personal names. The symbol “?* indicates unreadable.

The section number is indicated by a combination of letters and numerals to a maximum number of four characters. This is followed by the number of the plot. A grave comprising a multiple number of plots is shown as example 113-4 for a double plot or 113-5 for a triple plot.

Age is shown in years unless the figure is followed by “D” for days, “M* for months, or “W” for weeks.

The date of death is printed as shown on the headstone. Months have been abbreviated to show the first three letters.

We have not included terms of endearment generally, and we have endeavoured primarily to list data that may prove useful to researchers of family history. Punctuation is avoided as far as possible to save computer space.

Where an inscription refers to relationships only, those relationships are printed without punctuation. The phrase ‘accidentally killed’ refers to the person interred and is not in any way related to the remainder of the inscription.

‘Above’ is never included in the inscription. The meaning of the word is made clear because indexing usually separates the relationship to which it refers. This is replaced by the use of [personal names1 where the surnames are the same. Should the surname differ, it will be shown in fsquarel type brackets.

An emblem or positional information is shown in {type} brackets, illustrations of this being {Masonic) or {with Annie Jane Oakley)

In an inscription such as ‘- Mum and Dad’, the hyphen indicates these words are to be found at the foot of the grave.

Researchers may be able to imply relationships with others in the same or adjacent graves. For that reason, this index is included, and a study of the relevant section map will locate the position of the grave in which you are interested.

The commencement date of transcribing in each section is provided primarily to explain why information of a burial which took place at or about the time of transcribing may not be included in the book.

Burials were taking place sometimes in the sections in which we were transcribing as well as in the sections that we had recently completed. It was not always within our capacity to retrace steps to be able to include those burials unless an inscription had been provided or had been added whilst the transcriber was working at that place or was in the near vicinity.