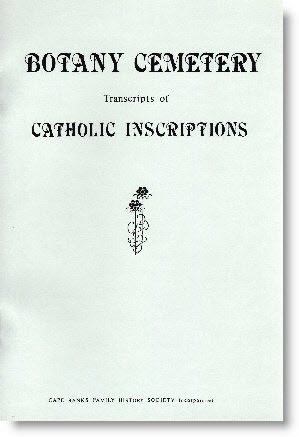 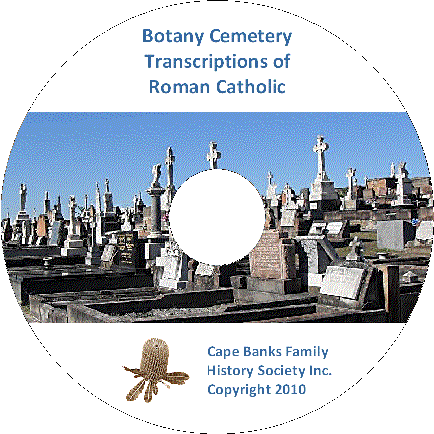 Our established program of “Cemetery Picnic Days”, held at two weekly intervals during the months of February to November was maintained, and the transcribers who attended on these days varied in number from four to nine.

During the interval between the transcribing days, the information was entered onto computer disc and a print-out was provided to enable us to check the accuracy of our work prior to proceeding further. Our members gave their time to the project as much and as often as they were able and we give our thanks to them.

The Catholic portion of the cemetery consists of thirty-two sections and the number of names that we have recorded is slightly over twenty six thousand. We do not have access to the burial records. The information in this book is only that which is inscribed on the headstones and we have included only the pertinent information. Superfluous words and verses have been excluded.

Botany Cemetery is situated adjacent to Botany Bay in the City of Randwick. The Trustees at the time of publication are as follows,

We are grateful for the co-operation which we have received from the Botany Cemetery Trust in allowing us to proceed with this project and for the help that the staff of the office has given us when we have needed it and for placing our publication on display.

All proceeds of the sale of the book go to Cape Banks Family History Society Inc.

The listing is in order of surname and the first initial of three possible personal names. The symbol “?” indicates unreadable.

Age is shown in years unless the figure is followed by “D” for days, “M” for months, or “W” for weeks.

The date of death is printed as shown on the headstone. Months have been abreviated to show the first three letters.

We have not included terms of endearment generally, and we have endeavoured primarily to list data that may prove useful to researchers of family history.

Punctuation is avoided as far as possible to save computer space. Where an inscription refers to relationships only, those relationships are printed without punctuation. The phrase “:Accidentally killed:” is not in any way related to the remainder of the inscription.

“Above” is never reproduced, as indexing usually separates the relationship to which it refers. This is replaced by the use of [personal names] where the surnames are the same. Should the surname be different, it will be shown in [ ] type btackets.

Emblems or positional information is shown in { } type brackets, illustrations of this being {masonic} or {with Ann Jane Oakley}.

In an inscription such as “-Mum and Dad”, the hyphen indicated these words are to be found at the foot of the grave.

Researchers may, in view of other information, be able to imply relationships with others in the same or adjacent graves. For that reason, this index is included and a study of the relevant section map will locate the position of the grave in which you are interested.

The commencement date of transcription activity in each section is provided primarily to explain why information of a burial which took place at or about the time of transcribing may not be included in the book.

It was not within our capacity to retrace our steps or seek information of recent interments, to be able to include those burials unless an inscription had been provided or added prior to the transcriber passing the grave.

Usually it was quite some time after a burial that details were provided on a grave and consequently we occasionally came to a plot where it was obvious that there had been a recent burial but a headstone had not been provided or additional information had not been added to an existing headstone at the time that we were in the section.