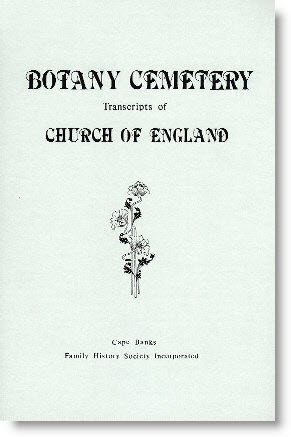 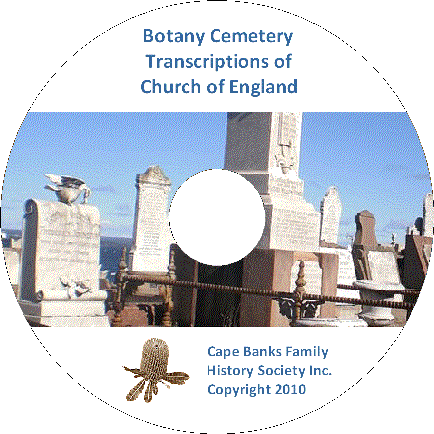 The work of transcribing the Church of England sections of Botany Cemetery was commenced on 21st of September 1986, five months after we had completed transcribing the Pioneer Memorial Park, and it was completed on 16th of November 1987.

The method that was decided upon to tackle the task was to set a program of “cemetery picnic days” at intervals of two weeks, from March to November.

During the fortnight after the transcribing day, the information was put on to computer and a printout was provided. Prior to commencing any further transcribing, the previous information was checked for accuracy, both of the transcriber and the typist, and any errors were corrected. By this method we had the knowledge that work already transcribed, was in fact completed and on disc.

The Church of England portion of the cemetery consists of twenty nine sections, and the total number of names recorded is slightly over ten thousand.

We have recorded only the pertinent information that is on the headstones, superfluous words and verses have been omitted. The interments in the plots that are unmarked have not been recorded, as it was felt that in some cases, privacy may have been invaded if this information was sought from records.

The number of transcribers on any one day never exceeded nine and sometimes was down to four. People gave of their time as they were able, and we give our thanks to all of them, as we do to the member who drew the maps, and to the members who used their computers to record and compile the information.

Now that we have honed our skills in withdrawing information from sometimes difficult-to-read headstones, and learned to cope with heat, cold, and flies, we have set our sights on transcribing the thirty two Roman Catholic sections; that is our next project.

We apologise for any errors that may be found, but it should be understood that a lot of the stones have weathered to a remarkable degree in a comparatively short period of time, and have been quite difficult to transcribe. Some errors may also have eluded us when we checked our material prior to publishing.

We are grateful for the co-operation which we have received from the Botany Cemetery Trust and the staff of the office, and for the permission which we were given to proceed with the project, and to publish the book.

All proceeds from the sale of the book go the Cape Banks Family History Society Incorporated.

The listing is in order o-f SURNAME and the first initial of three possible personal names.

Six characters are used in the Section number. The first three, “CE:”, indicate Church of England. The following three possible characters indicate the section, by numeral or letter or a combination of both, in which the grave is situated. (Consult the maps for further information.)

Following the decimal point is the grave number in the section. Adjacent numbers or letters do not necessarily indicate physical proximity. In some sections numeral sequence does not follow logic. Consult the map of Lawn 2C for an illustration of this.

Age is expressed in years unless the figure is followed by “D’ for days, “M” for months, or “W for weeks.

Ages are as inscribed on the grave, and have not been calculated from birth dates and death dates.

Death dates are as inscribed on the grave stone, with the exception that months are specified in this listing as JAN, FEE, MAR, APR, MAY, JUN, JUL, AUB, SEP, OCT, NOV, DEC.

Inscriptions exclude terms of endearment generally and contain data that may prove useful to researchers of family history.

Punctuation is avoided as far as possible to save computer space. Where an inscription refers to relationships only – those relationships are printed without punctuation. The phrase “:Accidently Killed:” is not in any way related to the remainder of the inscription.

“Above” is never reproduced, as indexing separates the relationship. This is replaced by the use of “[Personal names]” where the surnames are the same. Should the surname be different, it will be shown in the [ ].

Emblems or positional information is shown inside { } brackets, not ( ).

Typical:- {masonic}, or {with Jessie Anne Hunter}. Note, the latter will only occur where – 1, the surname is different from the interred, – 2, the {with} refers to the FIRST person interred in the grave.

In an inscription, – Mum and Dad, the hyphen indicates this is to be found at the base or foot of the grave.

The commencement date of transcription activity in each section, is provided primarily to explain why information of a burial which took place at or about the time of transcribing, may not be included in the book.

Burials were taking place frequently in all sections of the cemetery, including the old sections, and additional burials occurred whilst we were transcribing in some sections, and in sections which we had recently completed.

It was not within our capacity to include these burials, as in the majority of cases it was quite some time after a burial that kerbing and interment details were provided on a grave, and consequently we sometimes came to a plot where it was obvious that there had been a recent interment, but where a headstone had not yet been provided, or additional information had not yet been added to an established headstone.

We did not retrace our steps over any section already transcribed, and we did not seek information that was not displayed for anyone to read.