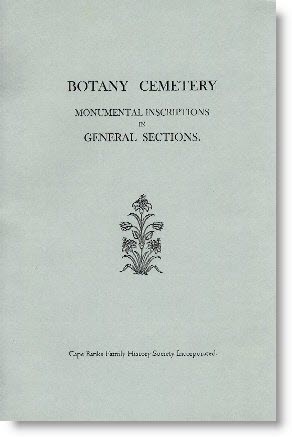 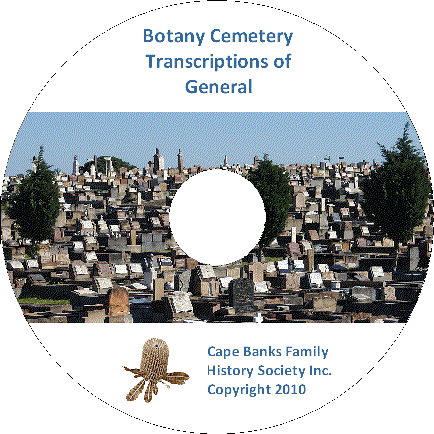 Cape Banks Family History Society Inc., began the project of transcribing shortly after its establishment in 1985. We commenced to transcribe the Pioneer Memorial Park as a bicentennial project in January 1986. Following the completion of this and as a natural progression, we thought it would be a good idea to transcribe the whole of the cemetery. This total concept was completed in January 1994.

The streaker’s reasoning – “I thought it was a good idea at the time” – soon began to take on the appearance of applying to us. At the commencement, when we looked out over the vast spread of the cemetery from a high vantage point in the older portion of the cemetery, and observed what lay ahead of us, there was some concern and wonderment as to whether we were being too ambitious and whether we would ever accomplish the task.

Initial enquiries had revealed that apart from a plan of the broad outline of the cemetery showing the locations of the denominations, there was no help that could be given to us regarding the detailed layout of sections within them.

As a consequence, before commencing in each denomination, every section within it had to be surveyed on foot to work out the plot numbering so as to draw up a plan and to ensure that no plots were missed. This was a time consuming but enjoyable experience and one that occupied many hours at the cemetery and a great deal of walking.

The adage that every long journey starts with the first step and then consists of many such steps that make up the whole journey, was a truism in this instance. What appeared to be overwhelming when looked at as a whole entity became a progression of small easily handled steps that flowed from one step to the next. For reasons of our own comfort – to avoid the heat and humidity of the summer season – we found it most suitable to attend the cemetery only during the months of March to November inclusive.

Two days per month were scheduled for transcribing and this resulted in 102 days spent in transcribing the whole of the cemetery. A number of days were lost because of unsuitable weather and on at least two occasions we found the temperature to be too cold to persevere with any degree of comfort, and ceased our activities and went home after an hour or so. Of a total of 30 members who contributed their time, the daily attendance varied from 4 to 10.

The order in which the denominations were transcribed and the date that each book was first published, was . . . .

Transcribing the General sections commenced in March 1992 and was completed in January 1994. The number of names recorded is slightly in excess of 13,200. In accordance with our established practice, the accuracy of each previous day’s work was checked against a computer print-out by the transcribers, prior to continuing with new work on the next transcribing day.

As we progressed from the older General sections to those that were more recently established, we encountered an increasing number of inscriptions that were written in non-Enghsh languages. It was decided that where it was not possible to determine at least a name and a date of death, a  notation to that effect should be made against the plot number on the transcription sheet for later reference if as we hoped, we were able to arrange for translations. Those plot numbers were then recorded on their own transcription sheets in section groupings. This later was seen to be a fortuitous decision insofar as it allowed us to immediately produce the required transcription sheets and to easily locate the graves that were in need of translations.

As we neared the end of the project it became obvious that we had several thousand plots noted on the sheets in this category. Although we realised it was not going to be an easy matter to obtain translations of such a large number of individual plots, we were reluctant to exclude them from the publication without having made every possible effort to obtain translations. Over a period of several months serious thought was given to the matter and a number of possible solutions were discussed.

Enquiries made in some areas, from where we thought help could have come, were not successful, and as well, some of the suggestions that were considered were found to be impractical. We were given some help at an early time by Anthula Damilatos and Tas Psarakis who, as individual people and nonmembers of the society, became aware of our needs and spent some time translating with us at the cemetery. However the task that each tried to perform was too immense to be successful in the manner that we were using at the time.

We are grateful to them for their kindness in offering to help and for the work that they did perform on our behalf.

The solution to the problem came from one of our recent members, Alec Protos, who has a knowledge of the Greek language, and from Dorothy Hargreaves, a member of the Botany Cemetery Office staff.

At his suggestion, Alec was supplied when requested, with the plan of each section and the sheets containing the numbers of the plots that needed translation. He spent many hours working through them. The relatively small number of those monuments that contained inscriptions that he was not able to translate were given by plot number to Dorothy who was able to supply basic burial information from the records.

We are very grateful to them for the interest that they took in the project and for the amount of time they spent on our behalf. We also extend our thanks to the Botany Cemetery Trust and to the management of the cemetery for the help that was extended to us in completing the project.

All members of the society who were part of the transcribing team during the last eight years, and our member who, in addition to transcribing, entered the data onto computer, are thanked for their participation in the project. Their keenness, their accuracy of input, and their good company during those years is appreciated.