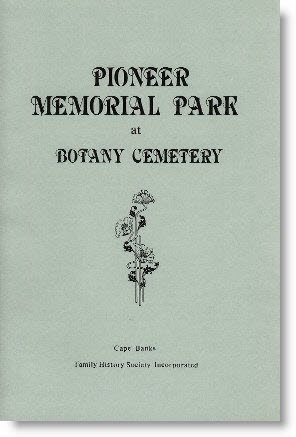 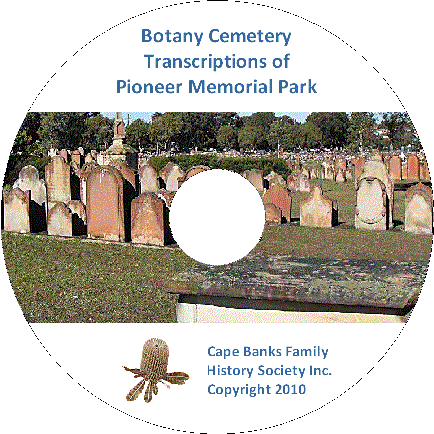 THE DESIGN AND CONSTRUCTION OF THIS PIONEER PARK WAS THE WORK OF TRUSTEE FRED W. READ

This is a record of the headstones which are now standing in the Pioneer Memorial Park at Botany Cemetery.

The original 2285 stones which were transferred in 1901 from the Sydney Burial Ground, also known as the Old Devonshire Street Ground, and the Sandhills Cemetery, were transcribed in 1969-1971 and published in 1973,in “Gravestone Inscriptions NSW Volume 1, Sydney Burial Ground1′, by K.A. Johnson and M.R. Sainty

Of these stones, 746 survived to become the Pioneer Memorial Park. Included in these is a very small number which are from other burial grounds.

As a Bicentennial Project, the Cape Banks Family History Society Incorporated decided to transcribe the stones, and was granted permission to do so by the Botany Cemetery Trust.

Members spent six field days during the months of January to April 1986, in transcribing the stones, and two field days in checking the transcriptions.

We apologise for any errors which may be found, but it should be understood that some of the stones are in very poor condition. Where necessary we referred for information to the above-mentioned book, and we are grateful to Messrs Johnson and Sainty for their permission to do this.

We are grateful for the co-operation which we received from the Botany Cemetery Trust, and for the permission which they gave to publish this book.

All proceeds from the sale of the book, go to Cape Banks Family History Society Incorporated.

It is hoped that this will be a lasting memorial to the early colonists of Australia.