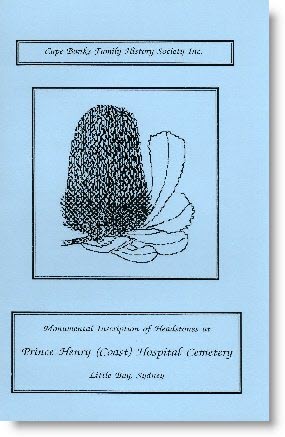 In 1881, following an outbreak of smallpox in the inner suburbs of the city of Sydney, the government of the day decided to establish a hospital at Little Bay which was far enough away from the city to ensure that the unfortunate people with this killer disease would be effectively quarantined from the rest of the populace. The site soon became Sydney’s infectious diseases hospital and housed patients suffering from typhoid fever, bubonic plague and leprosy as well as all other infectious diseases. It was inevitable that deaths would occur and so an area of land to the south of the hospital was set aside as a cemetery and a number of patients and staff members who died from these diseases were interred there.

Anyone suffering from a serious infectious disease was admitted to Prince Henry Hospital, and if they died of one of these infectious diseases they had to be buried in the hospital cemetery. Therefore this cemetery is rather unique in that the persons buried therein did not necessarily come from the area.

Many of the headstones have not survived, and many are unable to be read, but each headstone has been fully transcribed if possible, and of course, some of the people who were buried there would never have had a headstone in the first place.

The headstones are widely scatted over a large area and there are no numbered rows, therefore it has not been possible to list them in any particular order.