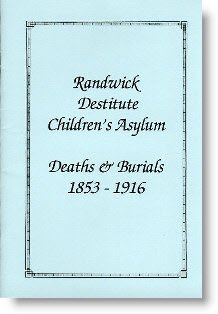 In 1852 the need for an Asylum for poor and desperately needy children was recognised. By 1858 the Blacket building (now known as part of the Prince of Wales Hospital Administration block, Randwick) had been built for the Asylum for Destitute Children and was occupied by them.

These children were to be cared for and educated until such time as their parent(s) or family members could reclaim them. Alternatively, at the age of 13 years the children could be apprenticed to anyone who made a donation of two guineas to become a Subscriber to the Society for the Relief of Destitute Children, the apprenticeship being for a period of five or six years.

It would appear that Ann Jane Smith, aged 3 years, who died in 1853 was the first child to die at the Asylum. Ann is shown to have been buried at Camperdown Cemetery (St Stephen’s Church of England, Newtown). Over a long period of time others are shown as being interred at:

Francis Martin, a 3 year old who died 18th October 1863, has a notation as being the first child interred in Ground attached to the Institute. The Rev. L. Fletcher officiated and Superintendent J. M. May with about forty of the children attended.

In 1867, 63 children died during an epidemic of measles and whooping cough and were buried in the Institute’s Burial Ground. This ground was used until 1891; later interments took place at Long Bay Cemetery. (Long Bay Road was later renamed Malabar Road and Long Bay Cemetery became Randwick Cemetery).

During the 1880s a new system was introduced for the care of poor and destitute children and eventually the Institute was taken over for the housing of wounded soldiers returning from the first World War.

Over a number of years the Prince of Wales Hospital, as we know it, has evolved on the site. In the late 1980s a new hospital development was proposed for the Randwick site.

The forgotten children buried in the Asylum grounds were to be discovered. The Sydney Morning Herald of 24th December 1993 reported the discovery of a small human bone (left temporal bone) found on the site of the proposed development. An archaeological dig had found the small fragment and so began the search for the children’s remains.

It was reported that once the remains are located … relatives will be notified to find out what they want done with the remains. Those unclaimed will be handed over for scientific research or buried elsewhere.

Of the 216 children who died whilst in care at the Asylum, 215 are listed herewith. Possibly Jorusha (sic) Burn (Reg. 2622), aged 6 years, whose despatch entry reads died and buried at Richmond is included in the total deaths.