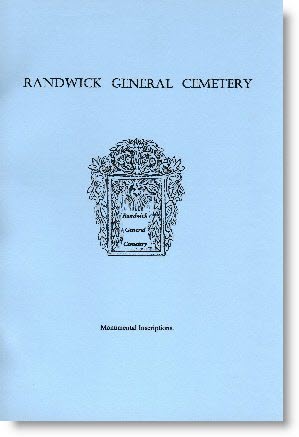 Randwick General Cemetery is situated on Malabar Road Randwick (formerly Long Bay Road), – its main entrance is at the convergence of Arden Street and Malabar Road. Eight acres of land had been set aside for the burial ground in 1872 and the first burials took place in 1874. When the ship “Malabar” was wrecked in 1931 under the cliffs near to Long Bay the suburb of that name was renamed Malabar and Long Bay Road became Malabar Road. Previous to this, although the correct title was Randwick Cemetery, the cemetery had been referred to in correspondence and in records both as Long Bay Cemetery and as Randwick Cemetery.

The Sexton’s residence was originally shown to be situated alongside the main entrance at the northern end. That land now contains a large number of burial plots in sections of General denomination and the residence is situated at the southern end on land designated as “rocky ground” together with provision for 41 mausoleums. The revised plan shows this.

The need for additional burial space has drastically reduced the earlier allowance that was made for open space with plantations. The main roadway from the entrance has had its width considerably reduced with the addition of rows of allotments placed on each side. The roadways between the above mentioned portions have been reduced to narrow pathways and the width of the road running around the inside of the Malabar Road boundary has been reduced by the provision of additional burial plots alongside the wall on a considerable portion of that roadway.

In some parts of the current plan, denominational areas are not clearly defined and we found that reference to the microfiche records of burials – available from earliest burials to 1983 – was sometimes necessary to establish our movement within a row from one denomination to another. It is also apparent from the records that the location of a grave within a denominational area does not necessarily relate to the religion of the person interred therein.

Between the time of commencement of our project in November 1992 to its conclusion in August 1993, we spent approximately 360 hours at the cemetery transcribing the inscriptions on the monuments. Following each visit a follow-up visit occurred to check the accuracy of our work by use of draft print-outs. At least an equal amount of time was occupied in entering the data into a database and then indexing the names.

In 1901, to allow for the building of Central Railway Station, the remains and monuments in Devonshire Street (Sandhills) Cemetery were removed to several other cemeteries. Some came to Randwick and the names of those people together with any other information that is available is shown on page 325.

The number of entries in this book is approximately 10,800. We found that a surprisingly small number of monuments were damaged or weathered to the extent that they were not able to be read. In many cases confirmation of indistinct information was able to be gained from the microfiche records.

In compiling this listing we began at the southern end of the cemetery and using the current plan, worked our way across to the northern end Original open space which has now been taken up for burials has caused some portions to have a mixture of denominations within the rows. For this reason it would be difficult to provide plans of sections that could be included in this publication and no attempt has been made to do so.

It must be emphasised that notation of a death date on a monument need not necessarily indicate that the person is actually buried in the cemetery or that the date of death is correct A death certificate will supply the exact place of burial and confirm the date of death.