Ellis BENT was the second son born to Robert Bent, a London merchant, who made his money trading with the West Indies.

Ellis was appointed Judge Advocate for NSW in January 1809 and sailed with his wife and son in the “Dromedary”, the same ship bringing Lachlan MACQUARIE and the 73rd Regiment to command the colony. The two men becoming friends and Ellis was well-regarded by MACQUARIE, who had a residence built for him in 1812.

Ellis made recommendations and reformed the judicial system of the Colony and due to the lack of lawyers in the colony allowed ex-convicts to assist in his courts.

But what had started out as a good friendship began to deteriorate as BENT did not always agree with MACQUARIE, especially the suggested changes to shipping rules which BENT found to be unnecessary and some illegal.

MACQUARIE applied to London to have BENT dismissed but before the dismissal arrived back in the colony, BENT who had once been described as a tall heavy man was in poor health.

Ellis died 10th November 1815 leaving 4 children and a widow pregnant with his 5th child. Although she was granted £200 a year Mrs BENT eventually returned to England.

Bent Street in Sydney is named after him.

Ellis was buried in George Street (Town Hall cemetery) a few years later his remains were removed to Garden Island (where he once held a lease of the land) until the Island returned to the Royal Navy, then later his tomb was transferred to St Thomas’s Cemetery, North Sydney, then to accommodate the building of the railway the remains were removed to Botany Cemetery in 1901. 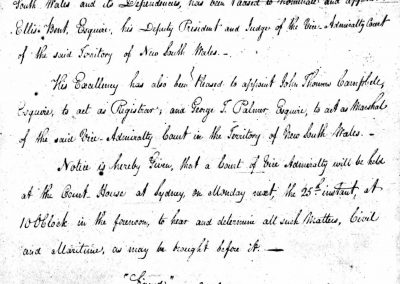 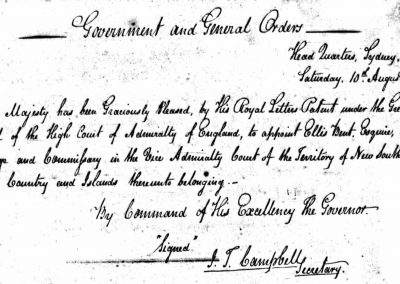 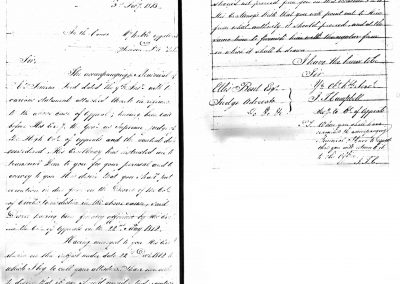