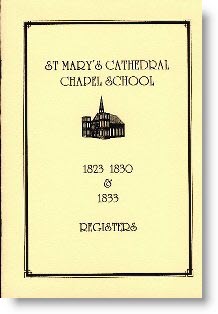 The history of St Mary’s Cathedral Chapel School can be traced back to 1820 when Lachlan Macquarie, Governor of New South Wales, promised land to the Catholic Church for a Chapel and a school house. This land was at the northern end of what was to become known as College Street.

The foundation stone for the original St Mary’s Cathedral was laid in 1821 and records show that three years later, on the instruction of Father John Joseph Therry, the first school on this site was built’. Father Therry’s first school was located at the New Court in Castlereagh Street and had been opened in 1822 by Thomas Byrne2. As the first extant list of children attending the Roman Catholic School Sidney (sic) is dated May to August 1823 it is uncertain if this record is for the Castlereagh Street school or the new one at the St Mary’s site.

These early schools were staffed by lay teachers who were paid by the governor.

The original early registers for the St Mary’s Cathedral Chapel School have not survived. Despite this fact, it has been possible to retrieve copies of these registers from other sources for three short time periods of school attendance.

The 1823 list of 102 children is to be found as an addition to a Register of Baptisms and Marriages by Father Therry for 1832-1837. An application by Andrew Higgins to Major Goulburn, the Colonial Secretary, claiming payment for the lay teacher accompanies this list as does a letter from the Governor, Sir Thomas Brisbane authorizing for the amount of Thirty three Dollars & six cents (sic) to be paid out of public money to Father Therry for this purpose.

The 1830 list of 181 children can be found in the Colonial Secretary’s Correspondence for 1833. Lay teacher James Cassidy had been dismissed from his position in 1830 as the result of a conviction. Cassidy’s salary for the July quarter of twopence per week per child, a total of Nineteen pounds twelve shillings and five pence had not been paid to him three years later.

The 1833 list of 215 children is to be found among Father Therry’s papers. Included here are the ages of the pupils ranging from three to seventeen years.

All the names listed have been transcribed as written, but errors may have occurred in the original entries. For example the similar names of Thomas McLOGHLAN (1830), Thomas McGLOUGHLYN (1833) and Thomas McGUIRE (1830), Thomas MAGUIRE (1833) give rise to the belief that these could be identical children. The SEROME boys (1830) are possibly JEROME, while Thomas WELSH (1830) and Thomas WALSH (1833) may be the same child. Seven year old Bessy WOODLY (1833) could be the sibling of one or all of the older three WOODLEY children of the same entry year.

Quite a few children were attending school with contemporaries of the same name. Pity the poor teacher of the class of 1830 who taught four boys all named Patrick BYRNE.